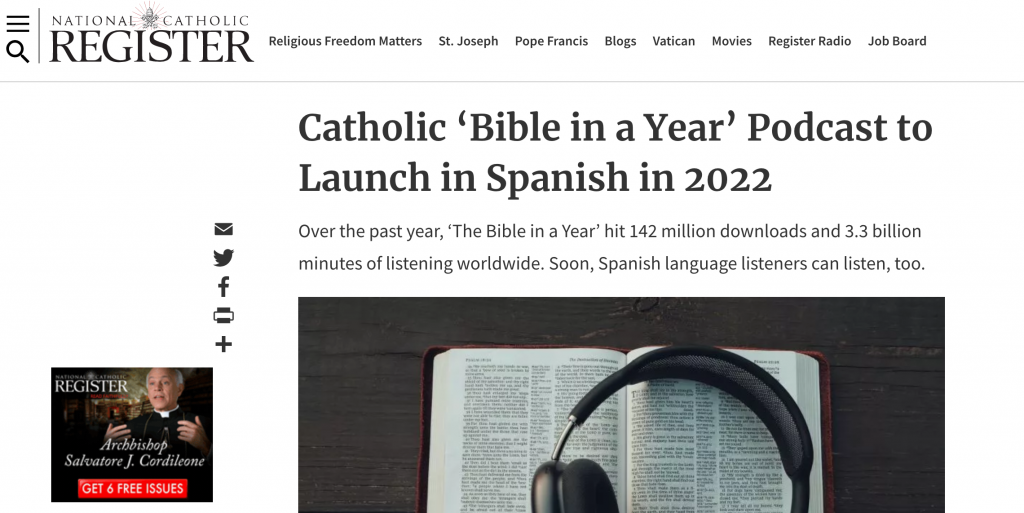 Over the past year, ‘The Bible in a Year’ hit 142 million downloads and 3.3 billion minutes of listening worldwide. Soon, Spanish language listeners can listen, too.

The hit Catholic podcast The Bible in a Year (With Fr. Mike Schmitz) will launch in Spanish Jan. 1, 2022. La Biblia en un año podcast will feature original commentary and a native-Spanish speaking host.

“The Bible in a Year podcast has been not only a huge success in the podcasting world, but it is also touching hundreds of thousands of lives every day, and I am sure 2021 will be remembered as a Bible renaissance year for Catholics,” said José Manuel De Urquidi, founder and CEO of the Juan Diego Network, which will produce La Biblia en un año podcast.

“Hispanics will soon be able to join in this biblical revival, thanks to the partnership between Ascension and the Juan Diego Network. JDN’s mission to evangelize, form and entertain Latinos through attractive content produced in the highest quality possible will reach new and very tangible heights with this project, which we pray will be of great blessing to the almost 50% of Catholics in the U.S.: Latinos.”

The Bible in a Year is a daily podcast produced by Ascension Catholic Faith Formation, part of Ascension Press. Each episode features two to three scriptural readings, a reflection on those readings by Father Schmitz and a prayer. Father Schmitz is a priest of the Diocese of Duluth, Minnesota.  https://1538b0add331210f491d16dcca919986.safeframe.googlesyndication.com/safeframe/1-0-38/html/container.html

Instead of reading the Bible linearly, the podcast follows “The Great Adventure Bible Timeline,” which was developed by Scripture scholar Jeff Cavins. Cavins is a featured guest on the podcast.

The podcast jumped to the top of Apple Podcasts charts within hours of publishing its first episode on Jan. 1, surpassing secular podcasts produced by organizations including The New York Times and National Public Radio.

Over the past year, The Bible in a Year hit 142 million downloads and 3.3 billion minutes of listening worldwide. The podcast has about 464,000 daily downloads, of which 90% are U.S.-based listeners.

The Bible in a Year will conclude Dec. 31, but it will remain available on every major podcast app for new users to listen to in the future. Ascension plans to advertise the podcast in December and January on a billboard in New York City’s Times Square, to capitalize on new year’s resolutions.  https://1538b0add331210f491d16dcca919986.safeframe.googlesyndication.com/safeframe/1-0-38/html/container.html

Ascension will also host a virtual retreat in February to support the community that grew around the podcast in 2021.