‘Bible in a Year’ podcast touts its top ranking, plans to launch a Spanish version in 2022 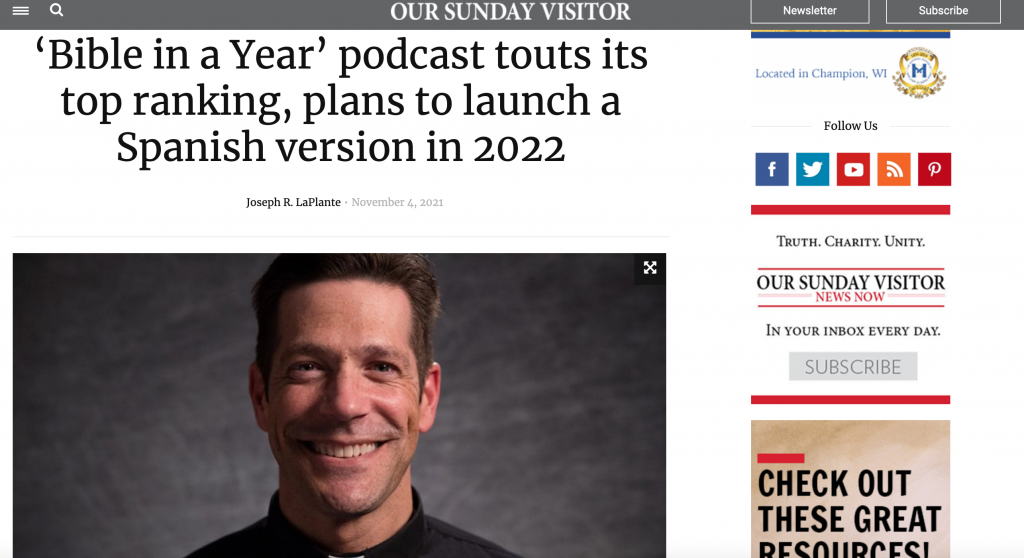 When the ball drops in Times Square to ring in the new year, a billboard nearby will announce to the celebrating throngs that “The Bible in a Year” podcast still tops the Apple charts in all podcast categories and is launching a Spanish-language edition the next day.

Ascension Press debuted the podcast last Jan. 2, and it has since generated 142 million downloads that account for 3.3 billion hours of listening worldwide, the company announced at a virtual news conference on Nov. 3.

​​”Through distraction and distress, our culture has lost a hopeful, historical biblical worldview, but by the grace of God, this podcast has helped thousands rediscover it,” said Father Mike Schmitz, who hosts the podcast.

“We’re humbled by testimonials from people of all walks of life who’ve started to apply a biblical worldview to their lives — gaining clarity on God’s will, overcoming addictions, returning to the sacraments or are converting to Catholicism, renewing marriages and relationships, and many more incredible stories.”

“Bible in a Year” looks to continue to build momentum in the coming year by launching a new Spanish-language version of the podcast with original commentary and a new native-Spanish speaking host on New Year’s Day. The podcast will be produced by the Juan Diego Network, which was awarded a $100,000 grant by the OSV Institute for Catholic Innovation for being one of three winners during last year’s OSV Innovation Challenge.

The podcast also announced that it will be holding “The Bible in a Year Retreat” virtual event for listeners to help Catholics cultivate a lifelong relationship with the word of God. The event will be held Feb. 18-20 with limited capacity.

“Bible in a Year” features Father Schmitz, a well-known author and speaker who is also director of Youth and Young Adult Ministries in the Diocese of Duluth, Minnesota, reading through Ascension’s Great Adventure Catholic Bible in 365 episodes, providing commentary, reflection, and prayer. Episodes average 23 minutes in length. Scripture scholar and Bible Timeline Learning System creator Jeff Cavins is the featured guest of the podcast.

Father Schmitz and Cavins participated in the news conference and shared the impact of the podcast and their own insights into its popularity. They said that in the times of distress, noise and anger the world is experiencing the last two years, God is providing a way through it all with the guidance of The Bible.

“In the last couple of years, in these unprecedented times, people have been really distraught and have lost their way,” Cavins said. “They have lost their North Star, and as a result, they are going into an emotional, financial and social vertigo in their life. They are looking for a brighter future and for someone to trust and they are not finding that in social media or in government, but they are finding it in the heart of their heavenly father and that he has a plan for their life.”

The press conference opened with testimonies from numerous listeners who extolled the value of reading the Bible through the program, many asserting they are lifetime Catholics and newly experiencing the Bible and its treasures by the narrative form of reading provided by Father Schmitz.

In 2020, Father Schmitz experienced the same battle millions of others were fighting.

“I was distracted by all the voices I was putting into my ears,” he said. “I was distressed by all the battles everyone is facing in the Church, in the culture and in the country. I was reading (the Book of) Judges at the time and realized that this is nothing new. … We needed to recover a biblical worldview.”

Following the success of “Bible in Year,” its producers have gotten requests to create a “Catechism in a Year” podcast that would follow a similar format and could possibly debut in 2023.