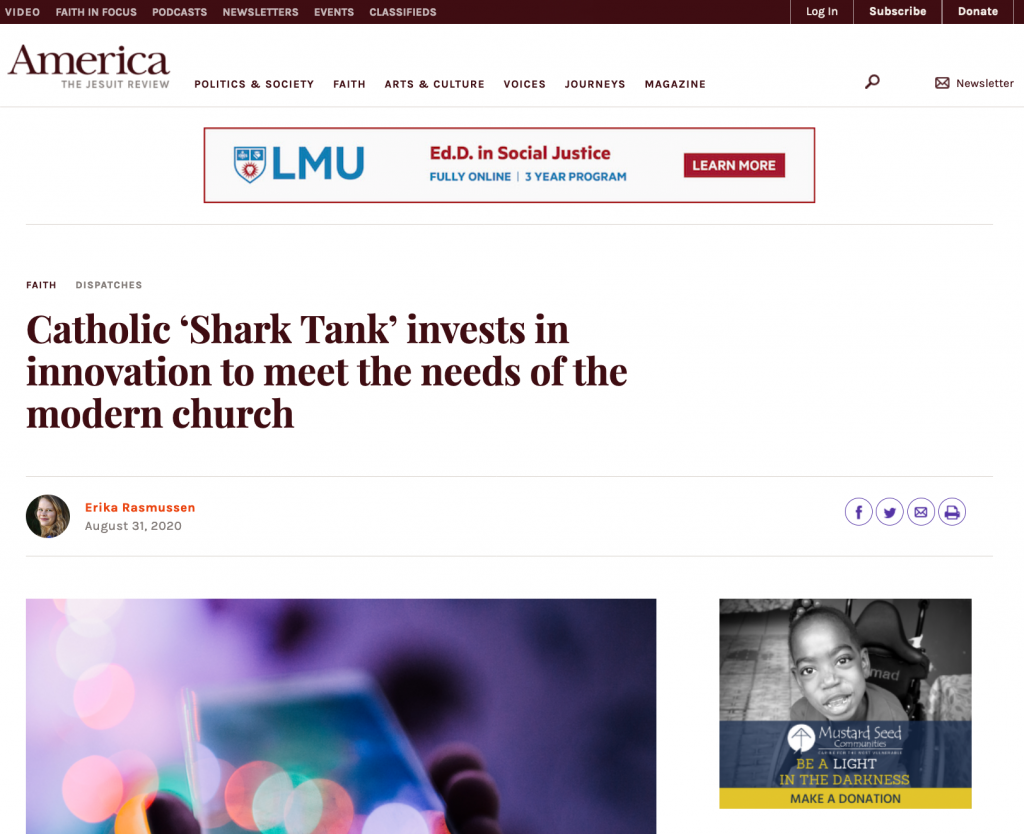 For most people, words like innovation and creativity probably spark images of scrappy programmers toiling in a Silicon Valley garage, artists establishing new boundaries or scientists pioneering tomorrow’s unimaginable discoveries. The words are less likely to bring to mind people laboring on the front lines of the Catholic Church. But for participants at the OSV Innovation Challenge’s virtual Demo Day this past Saturday, innovation and creativity are defining characteristics of what it means to be Catholic.

Jason Shanks, the president of the OSV Institute—the corporate giving arm of the Catholic publisher Our Sunday Visitor and sponsor of the challenge—understands the needs of the church today in terms of a glaring lack of investment in Catholic innovators.

In 2019, Mr. Shanks sat down with Anthony D’Ambrosio, the co-founder of Catholic Creatives, after doing a podcast episode on the subject of innovation. Their conversation distilled a recognition that the church is thirsting for fresh methods and ideas to advance its mission. Mr. D’Ambrosio saw a need for bridging the divide between the creative and institutional facets of the church, and Mr. Shanks found himself disappointed that in the last 20 or 30 years, the institute had not received grant applications from any truly game-changing Catholic initiatives.For participants at the OSV Innovation Challenge’s virtual Demo Day this past Saturday, innovation and creativity are defining characteristics of what it means to be Catholic.Tweet this

Over the course of its long history, the church started universities, built hospitals and created some of the world’s most breathtaking art. Mr. Shanks wanted to know: Where is that spirit of ingenuity today? His question led to the creation of the OSV Innovation Challenge.

“We think the larger crisis is this: that we sort of lost the Catholic sense of what it means to innovate,” Mr. Shanks told America. “We almost need to re-find our Catholic imagination.”RELATED STORIES

The OSV Innovation Challenge took on over 350 entrepreneurs as participants in August 2019. Through an intensive application process, this group was narrowed down to 50 and then 24 before a total of 12 finalists were selected in March to go through a customized accelerator program at the University of Notre Dame’s IDEA Center for 10 weeks before pitching on Demo Day. Catholic speakers, entrepreneurs, ministers and artists coached participants as they went through the program’s curriculum, and SENT Ventures guided them through spiritual formation. Finalists are now certified by the university as “Catholic Innovators.”

Demo Day began with a prayer and continued with the main event of impressive pre-recorded pitches as well as live introductions and Q&A among hosts, judges and the 12 finalists. That afternoon, three Catholic businesses each walked away with a $100,000 prize to advance their aims: Catholic Sprouts, Eden Invitation and the Juan Diego Network. Like viewing an episode of “Shark Tank,” it was striking to watch over Zoom as someone’s life changed in real-time—as a vocation received affirmation and a giant leg up.

The three winning enterprises all address a distinct need or community within the church. Catholic Sprouts aims to support and encourage Catholic parents in faithfully raising their kids. They release a daily five-minute podcast about faith and offer booklets on liturgical studies and a resource library for subscribers. Acknowledging the need for an easily accessible system that facilitates at-home faith education, Catholic Sprouts is planning to launch an app called the Domestic Church Project in September, which will offer both free and premium content. Its cornerstone will be a six-week boot camp that equips subscribed parents to be primary educators in their children’s faith, offering daily audio lessons and activities for the whole family.

The daily podcast will soon launch a Spanish version in collaboration with the Juan Diego Network, and the company’s wife-husband team, Nancy and Bill Bandzuc, plan to have the entire Domestic Church Project translated for the Latino community.

“It was only because of this innovator’s challenge that we realized there was a giant hole for Catholic parents. There’s a whole bunch of ‘what’ out there but no ‘how,’” Ms. Bandzuch said. “A parish sends home a packet—how? How do you make that into actual valuable conversation in your family? We feel that as parents ourselves, and we hear that from the people we serve, and so I think this gave us the courage to actually tackle the problem.”

“With this initiative, we’re not just talking about a new ‘small group’ program. We’re talking about people remaining with Christ in the Catholic Church,” said Ms. Carter. “Imagine the wounded realizing the church cares for them, deeply.”

The Juan Diego Network, the final winner, creates podcasts to address the lack of attractive, professionally produced Catholic content for the Latino community. “I left everything behind to be part of the answer,” said founder and director José Manuel de Urquidi in response to data that 40 percent of U.S. Catholics are Latino, while one-fourth of Latinos have left the church in the past decade. The network already hosts over 30 podcasts and is launching a new one this week. Latinos are consuming more and more podcasts, Mr. de Urquidi says, and he has a goal of reaching 500,000 unique listeners by the spring of 2021. The network hosted two virtual summits over the summer with prominent Latino leaders and speakers, another approach to the goal of evangelizing, informing and entertaining Catholic Latinos.

The businesses that did not “win” are certainly not at a loss, however, after such an extensive accelerator and networking process. Finalists pitched in categorized groups, and many showed promise in addressing specific needs within the body of Christ.“There’s an innovator in all of us. There’s a creative side to all of us. And so, it’s sort of a lay vocation, in a sense, to say, ‘I’m going to reach my neighbor.”Tweet this

In the area of educational or spiritual media, Balthasar Media pitched “St. Bernadine’s,” a narrative podcast that highlights how race and religion intersect in Baltimore, where the nation’s first diocese was established in 1789. ECCE! Films, producer of the Vatican-commissioned “The Humanum Series,” is working on a documentary series titled “Take Me Home” that reframes homelessness by following the work of Alan Graham, who sees as the root of homelessness a lack of community and connection and who started the Community First! Village in Austin, Tex.

The domestic church is My Prayer Corner’s passion, a group that will soon offer at-home altar and experience packs to help families lead prayer in their homes. Directly aimed at strengthening faith in the family by creating conversation around spiritual topics between fathers and their kids, Strong Catholic Dad sets subscribers up with online guides to relevant YouTube videos along with questions and activities.

Fierce Athlete endeavors to teach, lead and mentor young female athletes drawing on teachings of the Catholic Church, with a mission to promote “true and authentic identity and femininity within female athletics.” Harbor wants to convert empty parish spaces into prayerful live-in houses and co-working spaces for young Catholics to discern their vocation through community and mentorship.RELATED STORIES

Pastoral Parish has a software program to help parishes connect more with their people, allowing parish staff and ministers to focus on walking alongside parishioners in preparation for receiving the sacraments, while the software takes care of logistical details, tracking and potentially even data analysis. Another digital platform, Tilma, strives to connect both engaged disciples and those who have been “sacramentalized but not evangelized,” in addition to supporting parishes in caring more intimately for their flocks through direct messages and content related to parishioners’ interests. Following the theme of connection, Koin joins the domain of niche networking as a social media app that helps to build community among Catholics in their local area.

These are just a few examples of the innovative solutions inspired by the Catholic faith of entrepreneurs. Indeed, where there are unmet needs, there is also a call for creative thinking and experimental ideas or strategies. As evidenced by the infinite ways God’s love can reach others through us, living out the call to serve our neighbors will often be an imaginative labor.

“We have to be messy; we have to get our hands dirty. This is iteration; this is what entrepreneurs do. A lot of what [Pope Francis] talks about I think really resonates in this innovation ecosystem,” Mr. Shanks told America. “There’s an innovator in all of us. There’s a creative side to all of us. And so, it’s sort of a lay vocation, in a sense, to say, ‘I’m going to reach my neighbor. I want to listen and find out what their needs are. I may have to do things in new, innovative, entrepreneurial ways.’ It’s a calling forth; it’s a calling out. And because of that, I really think that’s sort of the path to sainthood.”

The OSV Institute plans to make the challenge an annual effort.

Correction, Sep. 2: This article has been updated to to correct a misquote. Ms. Anna Carter said, “we’re not just talking about a new ‘small group’ program,” not “’solver’ program’” as originally written.